Thank you very much, Linda and ayis. Linda, I think that most likely what you have shown from the Met and what I have shown more fully in the link is indeed the same piece, which means that the hands are not those of Fatima, for they were not so interpreted by the person who provided the Christian inscription on the piece, which presumably was part of the original piece (unless it was added later). The Met gives the full text of that inscription as I pasted in below, and it is unambiguously Christian. So that issue - I too was interested in that! - seems to be resolved in a way one might not initially expect. The Met does point out that the workshop made pieces for Christians, Muslims and Jews, so I suppose it could adroitly produce hands which in another instance would be those of Fatima! As for the armlet idea, I am very glad to hear, ayis, that there is in fact a clasp, which settles that issue firmly. Although that is enough, Linda's point about the pearls is also an excellent one to make. I shall thus be able to let Facebook viewers know (about 15,000, now!) that the piece is a choker. As for the age: I think we are at the very least agreed that that piece is not frightfully early - certainly not as early as the one in the Arab Institute. So ..... thanks, both of you, and I shall not only carry all this in my own head, but have more reliable info to convey to the Facebook viewers, which is excellent. The FB page is good if accurate, but potentially harmful if it is not!

My opinion is that pearls would be too fragile to be used as a bracelet like this.. if there is a clasp and it fits a neck then it was made either as is and or remade to this size later on.  I don't see the tubes in auction piece   being early like the ones in Paris.  These look 19th c to me and late but the style is obviously long in history. I have also seen other pieces from Spain with same shaped beads. I wouldn't be so surprised if we looked at Catherine of Aragon's jewelry she would have owned some pieces that had these beads incorporated as well.

This is a bead off the Salmancan necklace i own, but if you go to my boards on pinterest and see my board on religious jewelry , there are several necklaces that exhibit the long shaped beads as seen in the examples shown. These worn by Christians but the style of necklaces and workmanship are Islamic.

I am awake again and can throw in some comments, lol

Well as for the auction necklace, i have seen it and handle it the day before auction took place so i can confirm it is big enough for a very tight choker around the neck, the clasp is actually hidden inside on of the beads: very clever

So it is very obviou that it has been reworked somewhere in Morocco or Europe with pearls of the same caliber unlike older baroque ones common on older gold moroccan pieces up until mid 20th century, a wish for some contemporaneity for the wearer and a light design.

OTH, Joost's suggestion about a possible late spanish revival is very plausible, enamel to me was very fresh that's why i said i think the beads are not as early as let's say the arab institute's

An expert in that field should give us his insights

Early moroccan pieces would have had central pendants or at least an archaic stringing!

The tunisian necklace is i think not older than 19th century which is already very good for such pieces for the central coast, and similar shapes are still being produced

Many examples of old gold moroccan pieces sold at christies and sothebys the last decade have some barrel beads of this type, but the last time i spent an entire night going through my library and inspecting high resolution pictures ( including the famous crown) and i must confess that i have found clues of forgery and copies on most of these pieces!!!It was exciting and depressing 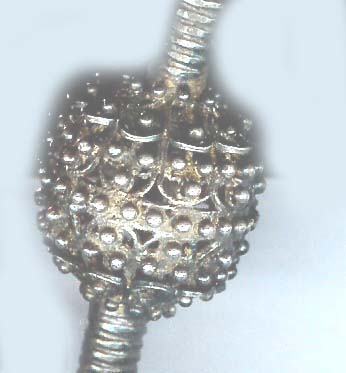 The fuller necklace at the Met  is same as the cropped version I showed. The hands to me are like Fatima hands and obviously of Islamic style which was much of what Spain was during this period.

A Facebook reader suggests that ayis's piece - no doubt because of its size - was constructed to be a bracelet, not a necklace, and isn't that possible?? She also sees the piece as essentially an example of Catalan modernism (so, made around 1900), which seems to me far less likely, on the face of it. Could the piece be as late as that, ayis? Or are the tubular pieces definitely early?

The  link showing a "complete" archetypal necklace suggests that the particular example was made for Christians, in Spain, and the argument for that necklace to be Spanish does seem convincing: "The consummate skill of goldsmiths in Nasrid Granada is evident in these necklace elements, which combine filigree, granulation, and cloisonné enamelwork. The Latin inscription on the central pendant, "Hail Mary, full of Grace," the salutation of the archangel Gabriel when he revealed to the Virgin Mary that she would give birth to the Christ Child, leaves no doubt that this necklace excavated in Granada before 1916 was meant to be worn by a Christian. Among a series of exceptional works that have been attributed to the same Nasrid workshop are items that were clearly destined for Muslim, Christian, and Jewish patrons." Isn't it interesting that the workshop catered for three quite different groups??

Actually, the ayis and Paris necklaces seem to take from the supposedly Spanish design only the tubular beads - the hands are entirely gone, along with the round pendant at the bottom, and we can only guess what connected the original components of the 15th/16th c piece. If the Paris necklace was indicative of the sort of thing worn in the 18th c then it would seem that the barrel shaped tubular beads had come to be worn on their own, with other connection pieces in-between! And the auciton piece ayis showed us perhaps "aped" something like the 18th c version, creating, however, something that could not be worn. The  common components in the three necklaces would seem to be the tubular beads, made of gold and enamel.

I don't know whether I have found the same link as you, Linda, but here is an extensive arrangement of the components of a necklace the Met classifies as coming from Granada, and I think it must be the same piece, given the three components at the bottom. An interesting piece with interesting components and design. It suggests to me that over time there have probably been a fair few changes in how the design developed. Here is my link: http://metmuseum.org/Collections/search-the-collections/170003908?r...*&deptids=17&where=Andalusia&pos=5