Marjorie Ransom writes that the vast majority of available Yemeni jewelry was made in the 20th century, and that the prominent styles of Bedihi and Bawsani did not develop until early in the 20th century.  She says that she will have the 19th century pieces in her next book which focuses on the silversmiths that made the jewelry.  She also at once point writes that much 19th century silver in Yemen was a 50/50 silver/metal mix.

I found a museum exhibit which has 18th and 19th century Yemeni jewelry, dated by the stamps on the jewelry.  I thought it was very interesting to look at the styles and differences with 20th century pieces.

You have to move the numbered slider to see the next piece, there are 23.

I found two collections of jewelry that were acquired by museums in the late 1800s or very early 1900s and hence reliably date the jewelry to the 19th century, and made a pin board out of them:  https://www.pinterest.com/polyhex/19th-century-yemeni-jewelry/

The filigree is finer and more ornate than I had understood 19th century Yemeni jewelry generally was.  There is also a consistent use of tiny blue stones which seems unusual.  Here are photos of a few favorites. More on the pin board.

Thank you very much Alaa for expanding on Nada's excellent first attempt. Oh dear, I think I'll have to abandon my dream of owning something signed by the man himself (Bawsani). But what has been revealed is really interesting. What we need is a collection of the signatures of the jewellers of the time to refer to. I don't know if Marjorie is thinking of doing this in her next book. But a page of name stamps would be really useful.

i am partly agreeing with Nada.

Harun which is definetely the judeo arabic  First name of Aaron.

As for Majkassy (very hard to read indeed so i may be mistaken), could mean he comes from a locality named  Majkas/mashkas/mashqas...

This is some very elaborate filgree work. truly wonderful! 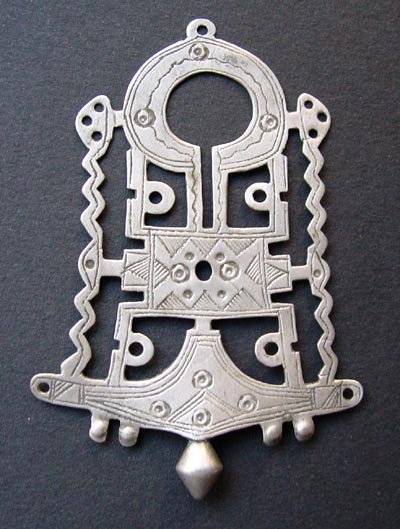 It could be! What I'm reading as Sami could be the sani, but it's hard to say without a clearer picture of the bottom inscription. Does anyone have an example of Haroun Bawsani's signature on another piece of jewelry?

That's so interesting, Nada. I hope it is Haroun Bawsani's signature. What a find it would be :))

Thanks very much Sami and Nada. @ Lynn.. Going back to the exhibit in the Walton Museum's exhibit, the signatures of the silversmith are said to be written in Hebrew. I wonder if they are in fact signing their work in Judeo-Arabic even then. It's also interesting that whereas they wrote their signatures in a straight line, the stamp of authority was that of the ruler, suggesting that the ruler was maintaining  control over these items and the silversmith was simply signing them off. This happens, according to the exhibit, until the beginning of the nineteenth century. And then... something changes because what we see next, apparently, is the stamp of the silversmith... no longer the trailing signature, no longer the authoritative stamp of the ruler. The silversmith seems to claim ownership. If that is so, it might be another element of the analysis of the age of Yemeni pieces. But what happened in the nineteenth century that led to the change?

Thelma's mark is quite clear, the problem I have is with signed beads that are often so worn that you can't really read anything.

OK, so it's maroon or more likely Haroun Sami and the family name is not clear beacuse it is a bit out of focus. Hope that helps

I'd love to try Thelma's but as Sami says it's upside down. I'll try saving it and flipping it right way up and we shall see!